HOME TRENDS This Is How Each Zodiac Sign Hosts a Party When it comes to hosting parties, everyone has their own style.

There are those who can spend hours in the kitchen preparing the perfect food options.

And some hosts will go out of their way to spend quality time with every guest, while others float

around making sure everything runs smoothly. Your partying approach may just come down your zodiac sign.

Check out your zodiac sign below to find out how you’re likely to handle your hosting skills.

The Party Theme You Can’t Resist, According to Your Zodiac Sign

The Casual Host: Aquarius (January 20 to February 18)
An Aquarius host won’t be as concerned with the details

that go into planning an event and will prefer a party that feels more like a casual group hangout. They’ll usually only invite a few people over

to keep the focus more on conversation than activities. They’ll get so passionately involved in political or other types of discussions that they may forget

to serve the food until realizing how hungry everyone is after such prolific debating.

The Compassionate Host: Pisces (February 19 to March 20)
Pisces is a thoughtful host who will prefer to lift everyone’s spirits at a party.

Because there’s a hint of romance to the sign,

a party hosted by a Pisces will likely be at an unusual time and in an unconventional yet soulful place. A Pisces host will continuously check-in to

make sure the small group of guests has everything they need.

Everyone will likely leave a party hosted by a Pisces feeling affirmed and well taken care of.

The Energetic Host: Aries (March 21 to April 19)
Aries is a high-energy,

good vibes type of host who knows how to bring life to the party without fixating on the details.

An Aries host can adeptly throw together a shindig at the last minute and will easily pull in a crowd, too. They like to make bold statements,

so the party will likely be at a striking and fancy location filled with fresh flowers and bright colors.

The Elegant Host: Taurus (April 20 to May 20)
Taureans are known for planning evenings on the formal side,

but they’re never flashy. A Taurus host doesn’t like surprises.

They will have a set menu for a specific number of people—so don’t show up without confirming and never bring an extra guest. Even if there is a kink in their plans,

a Taurean will still be a charming host and take care of any details that an extra guest might need.

The Generous Host: Gemini (May 21 to June 20)
Gemini folks are very flexible, giving, and super fun hosts. That’s why their party will probably have a buffet or food ordered in from multiple locations so there’s something to satisfy everyone. This very social host will spend time buzzing around talking to as many guests as they can. A Gemini host will likely have invited more people than intended, but that’s okay with them once they see everyone is having a good time.

The Comforting Host: Cancer (June 21 to July 22)
Cancers prefer parties that offer comfort. They’ll invite everyone they feel connected to, from family, friends, and acquaintances they knew years ago. They’ll even welcome extra guests that tag along. Cancers fixate more on the menu than anything else, and they’ll likely spend several days planning and cooking up a storm. They’ll insist on doing everything themselves and won’t ask for help, because their goal is for everyone to leave their party with a full stomach and warm heart. ออกแบบบ้าน

It’s an approach that has earned Demeyer a global following.

It’s an approach that has earned Demeyer a global following. PieterJan Mattan, a Belgian creative director now based in New York, was instantly dazzled by the designer’s rule-breaking ethos when they met a few years ago. “Jean-Philippe’s approach is very surreal and eclectic, off the trend train, and very daring,” Mattan says. “I was immediately attracted to his unconventional style.”

One of Mattan’s clients, the Los Angeles–based, Studio KO–designed Flamingo Estate, has “acquired some beautiful pieces,” Mattan says, “including Demeyer’s floral ChaCha sofa, which is a real showstopper.”

While Demeyer’s flair for furniture and decorative accessories has served him well, he says he feels that all interiors—both his own and the ones he designs—should foster an energy in the space that’s more than the sum of their parts. In that way, he believes, they will feel fresh and interesting for a long time to come. In his own dining room, for instance, he pairs the original Gothic fireplace with a fanciful plaster-and-resin table, which he then cheekily tops with candlesticks resembling cigarette butts.

Demeyer’s decorating strategy is an intuitive one. He maintains that the best interiors embrace the quirks of their era and slough off dogma. “Designing an interior is not a religion,” he insists. “I often compare myself to a cook. If a recipe calls for pepper, why not use cayenne?” สถาปนิก 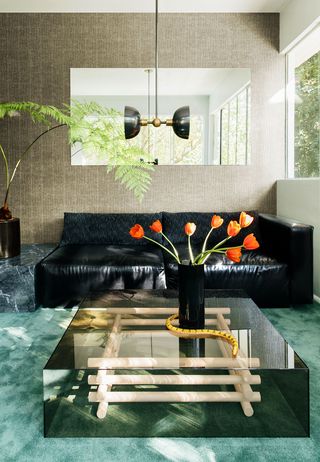 In a 19th-century neighborhood in Mexico City,

a jewel of 20th-century Mexican modernism sits quietly tucked away among the trees.

Across town, the design cognoscenti book months in advance for a timed peek at Casa Luis Barragán,

the home and studio of the famed Mexican architect.

But here in the city’s Colonia San Rafael enclave, furniture designer Mark Grattan has only to roll out of bed to find himself immersed in the world of Barragán,

having scored a coveted apartment in a rare building designed by the late icon.

Grattan is the founder of a red-hot furniture design studio,

VIDIVIXI, and a star on the rise. Solange Knowles recently nabbed him as a product development consultant for her design studio and creative agency,

Saint Heron. And this spring, the charismatic young talent makes his television debut as a participant in Ellen’s Next Great Designer,

How this native of Hudson, Ohio, ended up in Mexico City is a complicated tale.

In 2016, he followed his heart and moved to Mexico City for a relationship.

There, he teamed up with British designer Adam Caplowe,

who became studio director at VIDIVIXI. But the love affair that had brought Grattan to the capital was rocky;

when it ended he decided to stay and find a peaceful space that he could make entirely his own. สถาปนิก 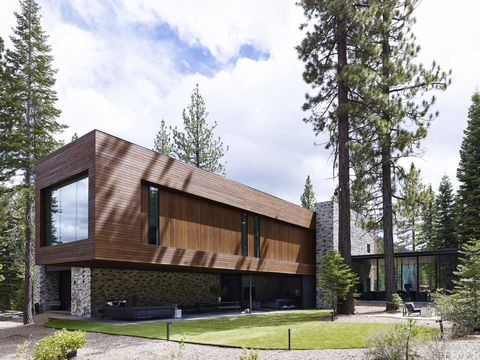 The mirrored side table in the living area is by Notre Monde,

and the fireplace surround is stacked flagstone.

Bush didn’t so much choose the furniture and lighting fixtures as curate a collection,

selecting everything down to the limited-edition Dyson vacuum.

Avoiding pieces that have been overused, he chose mostly midcentury furniture

by noted designers who are not household names,

such as the French designer Pierre Paulin.

His eye gravitated to sofas in cubic blocks and chairs with wooden or metal frames that let space flow through.

Italian and French pieces with spidery legs and arms add levity to the understated mix.

He pulled the furniture away from the walls to shape intimate islands within the larger spaces,

all set on smoky rugs that add more of that subtly luxurious, smoldering Ford mood.

The house is constructed of western red cedar and flagstone.

“It’s a beautiful but informal house where we can decompress,” says Palihapitiya.

“Whenever we feel disconnected and need to reset from all the complexities of our lives,

we come here and feel whole.”

He then underlines the connection to Ford and Silicon Valley:

“The way it was built, the material choices, the engineering, the lines—all of it was woven together with a creative discipline that makes the house exceptionally timeless and refined.”

In other words, nothing was lost in translation. ออกแบบบ้าน

along with her two kids and husband, have moved five times.

With five moves worth of picking up and putting down,

most homeowners would surrender to a move-in-ready,

fuss-free space to settle into. But that’s not Carolyn’s style.

The acclaimed designer was browsing through the pages of Street Easy

when she discovered a listing in one of her favorite buildings–a condo on a cherry-tree lined street in Tribeca’s historic district. She made an offer that same day.

The offer was accepted, and from that point forward she knew her work was cut out for her.

“The home was very dark and cavernous, the layout was weird and there was no overhead lighting. It felt oddly large but had no flow,” she says.

Only a short time after closing the deal, the renovations began.

Carolyn stripped down every surface of the home,

and completely reimagining the architecture, for better flow and light.

“Each wing has its own aesthetic, with everything from traditional

European influences to nomadic materials, all interpreted through a bold, clean-lined use of space. The modern twist on the old-world is the uniting factor in my home,” she explains.

A global nomad and self-proclaimed wanderluster,

Carolyn’s home is a distillation of fun, filled with refined and eclectic touches that balance old and new. The four bedroom condo is,

as Carolyn puts it, her “final landing pad.”

We got a chance to chat with the designer about her favorite spaces,

and the process of crafting the perfect home.

“I feel like we’ve been trained that what you see is what you get.

There’s a selection of things in the world and you choose one of things that’s supposed to be it,” Linda said.

With Etsy, “You aren’t restricted on everything. You have the the chance to co-create something with someone.” สถาปนิก

Once the architecture satisfied them, including elaborate moldings

Once the architecture satisfied them, including elaborate moldings and coffered ceilings to hide unlevel beams, they turned their well-trained eyes to surfaces. Steil, who teaches at the New York School of Interior Design, likes color; Pike, not so much. “You get tired of one color, and I’d be wanting to change it every six months,” he says. Blessed with such good light, however, they found they could move away from basic white into various shades of gray, each hand-mixed by Pike.

Knowing how to embrace gray areas—whether in design or in relation­ships—is the key to any good collabo­ration: “We just trust each other, that’s all,” Pike adds. So much so that they saw eye to eye about how to fill their gray rooms with an emphasis on texture over color, and with a quirk factor to bring in mystery and whimsy.

A taxidermy African nyala head from upstate sets the offbeat tone in the living room by looking askew rather than forward. Next to a Gustavian settee from Lars Bolander, a 1915 bust of a Swedish boy purchased from Dienst + Dotter Antikviteter looks out to the garden below. A Swedish grandfather clock presides across the room with stately grandeur. Each object, whether handmade, found in the woods, or purchased at an antiques shop, is carefully considered to fit in while standing out.

“Their attention to detail, texture, and color just floors me,” says their friend John Derian, the artist, designer, and cult shopkeeper. “You see a passion in everything they do.” สถาปนิก

and from the outset, the Mediterranean Revival-style estate on Miami’s

beachfront served as a celebratory oasis. Everyone

from the Duchess of Windsor and Noël Coward to Frank Sinatra

and Elizabeth Taylor could be found there lounging in the sun,

Today, a new generation of sophisticated sybarites is jetting to that fabled stretch of sand,

which still retains the original clubhouse, thanks to a 21st-century vision

of beachside fabulousness: a pair of glittering residential

the virtuoso architect who is credited with conjuring some of the world’s most desirable contemporary high-rises devised for luxury living.

who had previously resisted the impulse to own a beach house,

came under the Meier-in-Miami spell.

Even before the project broke ground, t

hey purchased a unit on a lower floor and enlisted their longtime interior designer,