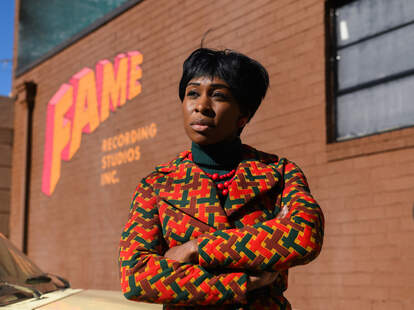 There’s a test that any narrative project about a great performer has to pass. At any point in the proceedings, do you find yourself wanting to turn it off and go watch the real subject do their thing? Bohemian Rhapsody, for instance, fails this test in many ways but particularly in its final sequence, which recreates Queen’s Live Aid set with a lot of CGI. Why not just cue up YouTube and watch Queen’s actual Live Aid performance? Now, the new installment of Nat Geo’s Genius anthology series faces a similar problem with regards to its subject, Aretha Franklin, specifically in the sixth episode, “Amazing Grace.”

The hour—which closes out the season’s three-night run on Tuesday, with all six episodes available on Hulu on Wednesday—attempts to recreate the live recording of Franklin’s 1972 gospel album at the New Temple Missionary Baptist Church. And while Cynthia Erivo, who portrays Franklin, has an astounding voice, I couldn’t help but want to turn off the screener and turn on Amazing Grace, the 2018 documentary now streaming on Hulu, which consists of archival footage of the actual recording session filmed by director Sydney Pollack. As talented as Erivo is, Franklin herself is just a few clicks away, possibly on the very same streaming service, if you choose to watch Genius: Aretha on Hulu.

The latest installment of the Genius anthology comes with a lot of anticipation but also a dose of controversy, with members of Franklin’s family alleging that producers refused to reach out to them in preparation. (They are cooperating with a feature film due out later this year, Respect, starring Jennifer Hudson.) Genius: Aretha isn’t disrespectful—at least not in the way that her son’s comments imply. But it also fails in its ultimate mission of honoring Franklin’s genius. ดูหนังออนไลน์