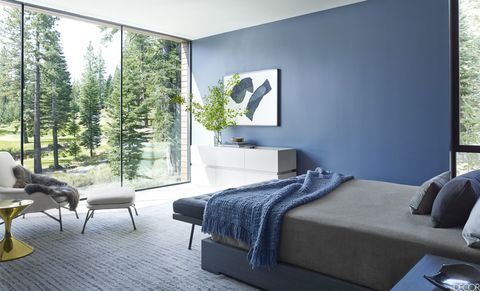 by Knoll upholstered in an Opuzen mohair, a chandelier by Lindsey Adelman,

and sconces by Fuse Lighting; the painting is by Jamie Bush,

and the wallcovering is by Élitis.

Palihapitiya adds that he and his wife, Brigette Lau,

who work in Silicon Valley and live there with their three children,

something that reflected the reality of a modern family that uses iPhones and believes in Teslas.

“We wanted a reflection of our taste, a modern aesthetic that would embrace our inner voice.”

n the master bedroom, an armchair and stool by Minotti,

upholstered in a Holly Hunt leather, are paired with a side table by Jonathan Adler, the bench and dresser are by Lawson-Fenning,

and the drawing is by Ching Ho Cheng;

the wall is painted in Bank Vault by Dunn-Edwards, and the carpet is by Decorative Carpets.

So the design of the interiors, by Bush, and the architecture of the house,

was to be an act of translation: both Tom Ford and Silicon Valley translated into a design more ambitious than usual in these parts.

“We wanted a showcase for the creativity of the people we were working with,”

says Palihapitiya, who invests in young talents and entrepreneurs and in things he